Pictures at an Exhibition

The centerpiece of our next concert will be an adaptation of Modest Mussorgsky's "Pictures at an Exhibition".  Well known as a showpiece for virtuosic pianists, this work is held in high regard as well through the symphonic orchestration by Maurice Ravel.  The transcription that River Winds plays is a faithful orchestration of the original, with strong ties to Ravel's arrangement, as well as to the original piano composition. This will also be our first performace in the wonderful Northshore Performing Arts Center.

It was probably in 1868 that Mussorgsky first met artist, architect, and designer Viktor Hartmann, not long after the latter's return to Russia from abroad. Both men were devoted to the cause of an intrinsically Russian art and quickly became friends. They likely met in the home of the influential critic Vladimir Stasov, who followed both of their careers with interest. According to Stasov's testimony, in 1868, Hartmann gave Mussorgsky two of the pictures later featured in Pictures at an Exhibition.[1] In 1870, Mussorgsky dedicated the second song ("In the Corner") of the cycle The Nursery to Hartmann. Stasov remarked that Hartmann loved Mussorgsky's compositions, and particularly liked the "Scene by the Fountain" in his opera Boris Godunov. Mussorgsky abandoned the scene in his original 1869 version, but at the requests of Stasov and Hartmann, he reworked it for Act 3 in his revision of 1872.[2]

The years 1873–74 are associated with the staging of Boris Godunov, the zenith of Mussorgsky's career as a composer—at least from the standpoint of public acclaim. Mussorgsky's distant relative, friend, and roommate during this period, Arseniy Golenishchev-Kutuzov, describing the January 1874 premiere of the opera, remarked: "During the winter, there were, I think, nine performances, and each time the theatre was sold out, each time the public tumultuously called for Mussorgsky."[3] The composer's triumph was overshadowed, however, by the critical drubbing he received in the press. Other circumstances conspired to dampen Mussorgsky's spirits. The disintegration of The Mighty Handful and their failure to understand his artistic goals contributed to the isolation he already experienced as an outsider in Saint Petersburg's musical establishment. Golenishchev-Kutuzov wrote: "[The Mighty Handful's] banner was held by Mussorgsky alone; all the other members had left it and pursued his own path..."[4]

Hartmann's sudden death on 4 August 1873 from an aneurysm shook Mussorgsky along with others in Russia's art world. The loss of the artist, aged only 39, plunged the composer into deep despair. Stasov helped organize a memorial exhibition of over 400 Hartmann works in the Imperial Academy of Arts in Saint Petersburg in February and March 1874. Mussorgsky lent to the exhibition the two pictures Hartmann had given him, and viewed the show in person. Later in June, two thirds of the way through the composition of the cycle of subjectively pessimistic songs Without Sun, Mussorgsky was inspired to compose Pictures at an Exhibition, quickly completing the score in twenty days (2–22 June 1874). In a letter to Stasov (see photo, right), probably written on 12 June 1874, he describes his progress: 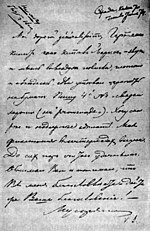 "My dear généralissime, Hartmann is boiling as Boris boiled—sounds and ideas hung in the air, I am gulping and overeating, and can barely manage to scribble them on paper. I am writing the 4th No.—the transitions are good (on the 'promenade'). I want to work more quickly and steadily. My physiognomy can be seen in the interludes. So far I think it's well turned..."[5]

The music depicts his tour of the exhibition, with each of the ten numbers of the suite serving as a musical illustration of individual works by Hartmann.[6]

Five days after finishing the composition, he wrote on the title page of the manuscript a tribute to Vladimir Stasov, to whom the work is dedicated. One month later, he added an indication that he intended to have it published.[7]

Golenishchev-Kutuzov gives the following (perhaps biased)[8] account of the work's reception among Mussorgsky's friends and colleagues, and an explanation for his failure to follow through on his plans to publish it:

"Soon, with the composition of the musical illustrations for Pictures from an Exhibition by the architect Hartmann, he reached the acme of that musical radicalism, to whose 'new shores' and to whose 'unfathomed depths' the admirers of his 'Peepshows' and 'Savishnas' had pushed him so diligently. In music for these illustrations, as Mussorgsky called them, he represented [chicks], children, Baba Yaga in her wooden house on chicken legs, catacombs, gates, and even rattling carts. All this was not done jokingly, but 'seriously'."

"There was no end to the enthusiasm shown by his devotees; but many of Mussorgsky's friends, on the other hand, and especially the comrade composers, were seriously puzzled and, listening to the 'novelty,' shook their heads in bewilderment. Naturally, Mussorgsky noticed their bewilderment and seemed to feel that he 'had gone too far.' He set the illustrations aside without even trying to publish them. Mussorgsky devoted himself exclusively to Khovanshchina."[9]

Mussorsky completed in August the last two songs of Without Sun, based on poems by Golenishchev-Kutuzov, and then resumed work on Khovanshchina, composing the prelude to Act 1 ("Dawn on the Moscow River") in September.